Q. Write a note on Classification of Computers   OR Explain Types of computer on the
basis of Size, Shape and Resources. OR How digital computers are classified?

Handheld Computers (like smart phone) are also potable. Handheld computer is also known as palmtop computer. It easily fits in the hand of the user.
Uses of Micro Computer
The PC is the most common type of computer used in the office. It is now widely used in many homes. These are also used for business and engineering application.
2. Mini Computers
Mini computers were introduced in the 1960s. Mini computer is larger and more powerful  computer than personal computer. It can execute five million instructions per second. It  generally consists of two or more processors.

Picture for a note on classification of computers (Mini computers) 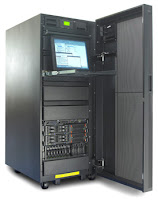 Mini computer can serve up to 4000 connected users simultaneously. It is normally accessed by users via personal computer or terminal. A device with a monitor and keyboard is called terminal. It is also known as dumb terminal. It has no processing power and cannot work as stand-alone computer. Examples of mini computers are:
•     VAX-8800
•     AS 400.

Picture for a note on classification of computers (Main Frame computers)

Picture for a note on classification of computers (Super computers) 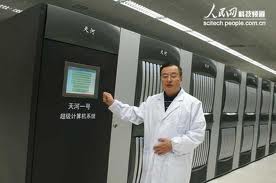 It is the most sophisticated, complex and advanced computer. It has a very large storage capacity. It can process trillions of instructions in one second. Super Computer is the fastest and most powerful computer of a time. Supercomputers are very
expensive. Supercomputers are used for highly calculation-intensive tasks. Super computers are used for specialized applications that require immense amounts of mathematical calculations. Supercomputers were designed primarily by computer scientist – Seymour Cray at Control Data Corporation (CDC).
Uses of Super Compters include:
1. Weather forecasting,
2. animated graphics like in Hollywood movies,
3. fluid dynamic calculations,
4. nuclear energy research,
5. space science
6. Weapon and missile design
7. and petroleum exploration etc.
Today, supercomputers are produced by traditional companies such as Cray, IBM and Hewlett- Packard, who had purchased many of the 1980s companies to gain their experience. Since October 2010, the Tianhe-1A supercomputer has been the fastest in the world; it is located in China.
The main difference between a supercomputer and a mainframe is that a supercomputer channels all its power into executing a single program as fast as possible, whereas a mainframe uses its power to execute many programs concurrently. The modern super computer consists of thousands of microprocessors. Super computer uses high-speed facilities such as satellite for online processing.
Examples of super computers are CRAY-XP, ETA-10, and Deep Blue and above all Todays number one super computer is Tianhe-1A supercomputer of China. Aircraft companies use super computer to simulate aircraft and check its performance. Many  Hollywood movies use it for animation purposes.

After studying  a note on classification of computers