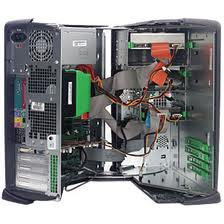 Q1. Define Hardware. What are different types of hardware?

The physical parts of a computer are called hardware. Hardware can be touched or seen by us. Different types of hardware components are as follows:

CENTRAL PROCESSING UNIT (CPU)
Central processing unit is the brain of computer. It is also called CPU or processor. Processor is used to process data according to given instructions.
1.            ARITHMETIC LOGIC UNIT (ALU):ALU performs data processing according to given instructions. All computations are done in this unit. ARITHMETIC SECTION of ALU performs arithmetic operations like addition, subtraction, multiplication and division on data. LOGIC SECTION of ALU performs logical operations like comparison between two values.
2.            CONTROL UNIT:Control unit controls all over operations of different parts of computer. For example it takes data and instructions from input unit and stores it into memory. It sends data to ALU for processing.
3.            REGISTERS:A register is a small and temporary memory area in CPU. It holds instruction and data as long as it is being processed. CPU contains a number of registers for example AX, BX, CX, DX etc. A Register may be of 8 bits, 16 bits, 32 bits or more.
Q5. Explain RAM and its types.
Ram stands for random Access Memory. Data in RAM can be accessed directly.. RAM is volatile. Data and programs in RAM are erased when computer is turned off. Therefore RAM is a temporary memory. Ram is also called Primary Memory or Main Memory.
Types of Ram: There are two main types of Ram.
Dynamic Ram (DRAM):Dynamic ram needs to be refreshed frequently. Dram is recharged many times in a second. Therefore, it is slower than SRAM.
Static Ram (SRAM):Static Ram does not need to be refreshed. It is more expensive and faster than DRAM.

Q6. Explain ROM and its types.

Q7. Write down notes on the following:

1. Flash Memory            2.            USB Flash Drive 3. Cache memory            4. CMOS
1.         Flash Memory
Flash memory is a form of EEPROM (Electrically Erasable Programmable Read-Only Memory). It is a form of rewritable memory chip that holds its contents without the need of a power supply. The memory is commonly used in memory cards, USB flash drives, MP3 players, digital cameras and mobile phones.
2.         USB Flash Drive memory
A USB flash drive is a flash memory integrated with a USB 1.1 or 2.0 interface. It is used as a small, lightweight, removable and rewritable data storage device.
3.         Cache Memory:A Cache (pronounced “cash”) memory is a small and very fast memory. It is used to speed up the transfer of data and instructions.
4.         CMOS memory:CMOS stands for Complementary metal-oxide semiconductor. It stores configuration information of computer. It is a battery-backed memory chip. It stores the information about disk drives, keyboard, mouse, monitor, current date and time, and other start up information.

Storage devices are used to store data and instructions permanently. Storage devices are also called secondary storage devices / backing storage devices / external storage devices or auxiliary storage devices. Secondary storage devices are used because:
Primary/main/internal memory/RAM is volatile and temporary. When computer is switched off, all data in ram is erased.
Storage devices can store large amounts of data and instructions permanently
There are three main types of storage devices:
1. Magnetic Tape    2. Magnetic Disk            3. Optical Disk
1.            Magnetic Tape
Magnetic tape is the oldest storage device. It is made of plastic coated with magnetic material. Data is stored on magnetic tape in the form of magnetic spots.
2.            Magnetic Disk
A magnetic disk is a thin circular metal or plastic disk coated with magnetic material. Data is stored in the form of magnetic spots. Magnetic disk is random access device. It is faster than magnetic tape. There are three main types of magnetic disk:
a. Hard Disk            b. Floppy Disk            c. Zip Disk
a. Hard Disk
The hard disk is also called fixed disk. It consists of one or more metal plates. The plates are fixed in the drive.
Following are major characteristics of hard disk:
b.  Floppy Disk
Floppy disk is also called diskette. It is a small plastic plate coated with magnetic material. Data is stored in magnetic spots. Main advantage of floppy disk is that it is used to transfer data from one computer to another. Floppy disk is available in two sizes:
c.         Zip Disk
Zip disk is similar to 3 ½ inch floppy disk. But it can store 100 MB data. Zip disk drive is used to read and write data on a zip disk.
3. Optical Disk
LASER technology is used to read and write data on Optical disk. LASER stands for Light Amplification through Emission of Radiation. Laser beam writes on the surface of optical disk by creating very small holes. The presence of hole represents a One and absence of the hole represents a Zero. There are following main types of optical disk.

CD-ROM:CD-ROM stands for Compact Disk-Read Only Memory. The data stored on Cd-Rom can only be read. It cannot be deleted or changed.
DVD stands for digital Video Disk. It is similar to CD-ROM. It can store up to 17 GB data.
Rewrite-able optical disk is used to read and write data on the disk. We can not only read data but also change data on disk. Rewriteable optical disks include CD-RW that is CD Rewritable and DVD-RW that is DVD Rewriteable.

Q9. What are commonly used units of measuring storage?

Units of measurement of storage

Bit:Bit is a short for Binary Digit. 0 and 1 are the only binary digits. A bit can hold a 0 or 1.
Byte:A combination of 8 bits is called a Byte.
1 Byte = 8 bits     , 1 KB = 1024 Bytes, 1 MB = 1024 KB, 1 GB = 1024 MB , 1 TB = 1024 GB
Q10.What are Dual Devices? OR What are dual-purpose devices?
The devices that can perform both functions of input and output are called dual devices. For example Hard disk drive, Floppy disk Drive, Magnetic Tape Drive, CD-Writer, Touch screen Monitor etc. These are also called Input/output devices, because they perform both functions.