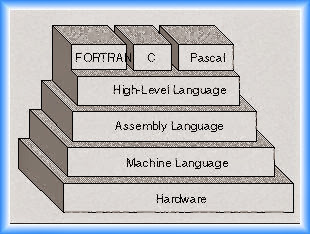 What is a Program and Programming Language

There are two main types of computer programming languages.
·        low-level languages
·        high-level languages.
Low Level Languages
These languages are near to computer hardware and far from human languages. Computer can understand these languages easily. Following are two low-level languages:
•     Machine Language
•     Assembly Language
Machine Language
A computer language in which instructions are written in binary form (0 and 1) is called machine language. It is the only language that is directly understood by the computer.
Advantages:
a)     Very fast program execution
Disadvantages:
a)     difficult to understand
b)     difficult to learn
c)     difficult to modify
d)     Requires deep knowledge of hardware
e)     Difficult to remove errors
Machine language is also known as first generation language.
Assembly Language
Assembly language is a low-level language. In assembly language, symbols are used instead of binary code. These symbols are easy to remember. For example Add instruction is used to add two numbers.
Assembly language is also known as second generation language
Advantages:
a) Fast execution of programs
b) easier to learn, understand and modify than machine language
Disadvantages:
a)     machine dependent
b)     Requires knowledge of hardware
High Level Languages
A type of language that is close to human languages is called high level language. High-level languages are easy to understand. Instructions of these languages are written in English-like words e.g. Print, Display, Write etc.
Advantages:
a) Easy to learn and understand
b) Easy to modify
c) Easy to remove errors
d) Machine independent
e) Better documentation
Disadvantages:
a) Less fast program execution
b) Certain operations can be performed

One thought on “Different Types of Programming Languages”